Abigail Gamble, a student at the University of Massachusetts, Amherst, visited the Peabody to examine stone tools for her senior thesis.  She looked at several stone blades from an archaeological site in Andover for her comparative study of blades in the Northeast.   The museum acquired the artifacts from collector Arthur Hofmann in the early 1940s. 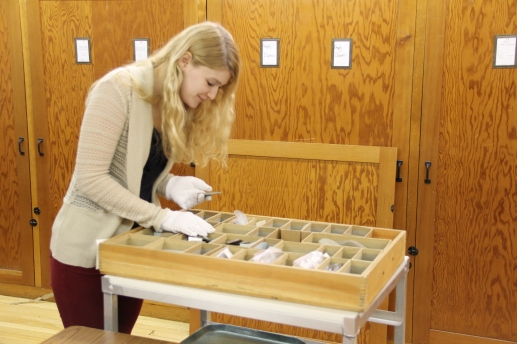 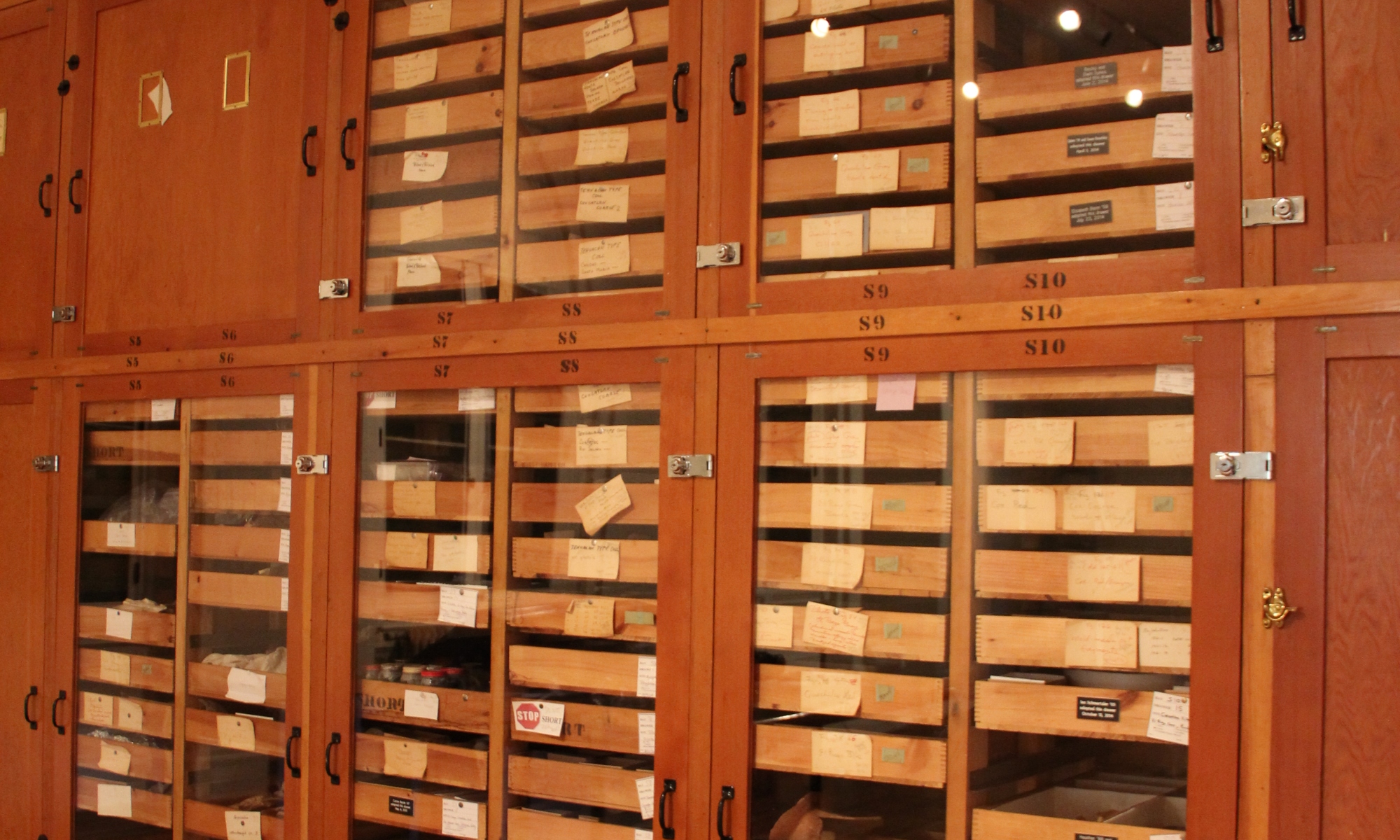 Updating spaces at the Peabody is like playing with a giant sliding puzzle. In order to rearrange one room, you have to make space in another for everything that will be displaced. We wrestled with this puzzle as we recently updated two major spaces at the museum – our basement work room and our main exhibit gallery.

The basement work room is the center of most of the collections work at the Peabody. It is where work duty students, volunteers, and collections staff spends most of their time. And, until recently, it was home to several staff work spaces too. But it was time to refresh the space and make room to spread out the collection as we transfer artifacts from the old wooden drawer to new archival boxes. 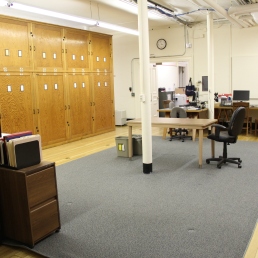 Updating the gallery space was no small task! First, all the old exhibit was dismantled and objects were returned to storage. Then the exhibit cases were removed. And finally, the false walls that confined the space were demolished. Patching and painting is now underway. Future projects will see updated lighting and restoration of the windows.

Peabody gallery – taking down the walls

Peabody gallery – taking down the walls

Conversations are on-going about how to utilize this newly empty gallery space. The added space has already benefited our community family days and will hopefully provide space for student curated exhibits and larger student and alumni events.

If you haven’t been over to the Peabody for a while, now is the time!

Origin stories among the Keresan speakers of New Mexico recount the beginning of Laguna Pueblo when two men—Prayer-Stick Boy and White Hands—were entrusted with leading the first people to a lake at the foot of a sacred mountain, destined to be their home on earth. White Hands ultimately guides the people to their home, but only after Prayer-Stick Boy attempts to settle the people elsewhere, which visits a life now burdened by troubles and hardship upon the pueblo. Part of the story—not shared with anthropologists—documents a second group of travelers that followed Earth Mother’s instructions explicitly and also reside at Laguna, but live as supernaturals in parallel to the original denizens of the pueblo. The interaction between the mortal and immortal residents is central to Laguna culture.

Photographer Lee Marmon’s trajectory as an artist shares a similar arc to those first people of Laguna. He is a product of the interesting melding of Native and non-Native people, and, as is mentioned more than once in Laguna Pueblo: A Photographic History, is like many artists: rebellious, free-spirited, with a zest for independence. In some ways he sounds a bit more like Prayer-Stick Boy—the original Laguna rebel than his righteous counterpart White Hands. Perhaps, however, the intercession of the Laguna supernaturals have helped shape his keen eye for subject and composition as a photographer. The book includes over 105 duotone photographs, most taken by Marmon between 1949 and 1990. The text deftly tells the stories of the landscapes and people photographed.

The book begins with an introduction that tells the story of the unlikely friendship between Marmon and physician Tom Corbett (Phillips Academy Class of 1956). The idea of producing a book was in the air for a long time and we learn that Corbett played a critical role in introducing the world to Marmon’s photographs, including a publishing company that produced posters of some of the most iconic images, like White Man’s Moccasins. Tom Corbett—in honor of his 50th reunion—donated a marvelous collection of Marmon’s photos to the Peabody Museum and arranged for a visit by the artist, as well as an exhibition at the Oliver Wendell Holmes Library on campus.

The trials and tribulations of Laguna’s people—from the consequences of uranium mining to government attempts to suppress language, religion, and native foodways—is etched on the faces in Marmon’s photography. Intriguing is Marmon’s medium—the photograph—most associated in Indian Country with Edward S. Curtis, who photographed Native America in the first decades of the 20th century for a massive book project financed by J.P. Morgan. But unlike Curtis, who we now know staged photos to enshrine the myth of a fading race, Marmon’s images are full of honesty, portraits of persistence and hard work, the punishment visited on the Laguna people for Prayer-Stick Boy’s treachery.

It’s not surprising that Laguna Pueblo has garnered significant praise since its publication in February 2015, including winner of the 2016 Western Heritage Award for Photography Book, the 2015 Southwest Book Award from the Border Regional Library Association, the 2015 New Mexico-Arizona Book Awards for Arts Book and Best Book, and the 2015 Southwest Books of the Year Selection.

Visit the University of New Mexico Press for more information and to order your copy today.

Masks are one of the most visual elements of a culture, often used to transform the wearer during rituals, ceremonies, or other events. The use of masks dates back thousands of years, at least to the Neolithic period some 9,000 years ago or much earlier. Many of our masks are believed to be from Mexico. Two years ago work duty students began researching some of the masks in our collection.  While not complete, their work has been invaluable for the classes we teach. Recently the Peabody pulled all the masks from our collection to share with students in Therese Zemlin’s art classes.

Entire class working on their drawings

One class has an assignment to make a 3 dimensional clay gargoyle. By studying the Peabody’s masks students investigate how artist’s created expressions, developed the proportions of facial features, and how human and animal features were melded together. The other class is learning to perceive minute details that are otherwise missed when we assume we understand what we see.

After looking at the masks and talking with me, the students are given time to begin sketching a mask of their choosing. This helps them to focus their attention even more and to gain a more intimate appreciation of the object in front of them, which will in turn aid them with their art projects.