Recently the History and Social Sciences Department has implemented significant changes to their History 100 curriculum, required of all ninth graders. One of the new features of the curriculum is the inclusion of “dips” or week long periods where students can delve more deeply into a subject. This allows students to practice historical literacy skills in a more targeted manner, while also offering the opportunity for more hands-on and experiential learning.

That’s where the Peabody comes in.

Both the Education and Collections programs at the Peabody have teamed up with the History and Social Sciences faculty to offer a week long intensive investigation of trade networks in the Americas. The focus of the week is to learn how to read objects as primary sources and to look for patterns and similarities between cultures to learn about the connections between the groups. The cultures that students will be focusing on are the Hopewell, Pueblo, Maya, and Moche.

For an entire week each Winter and Spring terms the majority of ninth graders will descend upon the Peabody to work extensively with our collections from the four cultures. The objects will be set up in “stations” according to their cultural groups and working in teams, students will rotate through each station examining the object and collaboratively answering questions.

Afterward, the teams will get images of all the objects and will be asked to sort them – using any criteria they want – before sharing their decisions with the class. Looking at objects creatively in this manner has often helped archaeologists to make connections that they might have missed otherwise. 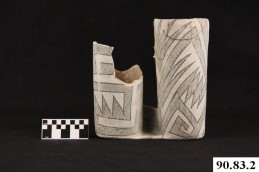 We look forward to working with students and faculty on this amazing adventure! (Although you will probably find us drinking soda or other caffeinated beverages after as we recover from the onslaught of the entire Junior class.)

About six months in and the reboxing project is beginning to take off.  With the help of students and volunteers, 52 drawers have been converted into 86 boxes.  These first months have been spent ironing-out the kinks in the procedure and strategically identifying areas of the collection on which to focus.

The inventories produced from this project have already helped to identify areas of the collection for further attention and have made some objects available for education use.

I am excited to pick-up the pace over the winter!

Archaeologist Richard S. MacNeish—known as Scotty—devoted his career to untangling two of the biggest questions of archaeology: when did people begin domesticating plants and how did that act impact and influence the development of civilization? During his tenure at Phillips Academy’s Robert S. Peabody Museum of Archaeology MacNeish led multidisciplinary expeditions to Mexico and Peru to search for the heartland of domesticated maize or corn. Before his death in 2001 MacNeish had searched for the origins of rice cultivation in China, studied early cultures of Belize, and planned to look at wheat domestication in Turkey. Evidence for domestication often could be found in dry caves, where ancient plant remains were preserved. Speaking of his research in China, MacNeish quipped, “I’ve crawled in and out of more caves than a Neanderthal caveman.”

Despite MacNeish’s indefatigable quest for the origins of the world’s most important crops, answers remained elusive. In Mexico’s Tehuacán Valley, near modern-day Puebla, MacNeish and his team reconstructed ancient environments, devised chronologies, and documented a sequence of corn domestication from tiny, primitive cobs to those that look much like the corn that was growing in the area during the Spanish conquest in the sixteenth century. MacNeish’s suggestion of an early date for corn domestication, however, was met with skepticism, as many archaeologists believed that these crops were developed after significant strides in social organization, urbanism, and the other hallmarks of civilization. A debate ensued, but much of MacNeish’s Tehuacán research was sidelined as other scientists found evidence for even earlier sites of corn domestication in the Mexican lowlands, pushing the dates back to at least 8,700 years ago.

MacNeish’s collections, preserved since the 1960s at Phillips Academy’s tiny Robert S. Peabody Museum of Archaeology, have continued to attract the interests of scientists. A November 21, 2016 article in the journal Current Biology reconstructs for the first time ever the complete genome of an early domesticated plant, based on a tiny, 5,310 year old cob from MacNeish’s Tehuacán project (Catalog number 90.184.36). The specimen was removed from an old exhibit case several years ago and loaned to the Smithsonian Institution’s Bruce Smith, a co-author of the new study. Statistical analyses of the DNA data indicate that the study specimen, dubbed Tehuacan162, is “a step that links modern maize with its wild ancestor.” Of particular interest were genetic markers for domestication—some of which were already exhibited in this early specimen—while others were not. This challenges previous models for corn domestication that focus on two major steps, countering that the history of domestication is more gradual and complex than currently believed. In conclusion, the study finds that Tehuacan162 is an ancient form of maize that is closely related to the ancestor of all modern maize, yet distinct from teosinte, a wild grass that is the closest living relative to maize.

Part of Scotty MacNeish’s 1970s era exhibit about his work in the Tehuacán Valley of Mexico–note the corn cobs and kernels.

Today the Robert S. Peabody Museum of Archaeology provides educational programming to the high school students of Phillips Academy, ranging from classes to work behind-the-scenes with our significant collections. Researchers also are encouraged to use the Museum’s holdings and often share their results with students.