When you think of the binary search algorithm you immediately think an archaeology museum is the perfect place for students to get a hands on example. Right?

Well it certainly was not what students in Nick Zufelt’s Computer Science 500 class expected when they showed up at the museum. To many of the students who had been to the Peabody with their history or science class to look at objects, it was a bit perplexing how they could be combining archaeology with computer science.

What many do not know is that the Peabody has many other resources that PA faculty can tap into.  Mr. Zufelt discovered something that Peabody Museum still had that no other place on campus (not even the OWHL!) still had: our card catalog.

When Nick first came up with the idea to use our card catalog in an interactive lab activity for his students, we were ecstatic. We love when Peabody resources are utilized for learning in such out of the box ways.  The card catalog was a perfect hands on example for students to understand the binary search algorithm.

To those who are not familiar with this concept (and I was certainly one of them!) Nick began the class with this simple introduction:

When you look up a word in the dictionary, do you start at page 1, look for the word, then move onto page 2, etc.? No, of course not. You have a more sophisticated way of searching through the massive list of words. This activity hones in on the algorithm underlying this process: the binary search algorithm. The basic idea is: chop in half, go to the half that will have your item in it; repeat.

Each student was then given a page listing 23 different cards from our card catalog system and told to pick one of them. Then they had to find the card and write down the process of how they found it, but in a manner that a computer could follow.

At this point, you might be saying to yourself, “wow that seems like a pretty easy project….” WRONG!

While this activity may strike us as simple, it actually turned into a battle of the wills for many students as they struggled throughout the period to create a very simple process that was also accurate. And when some students had a friend try their process, they often found that what they had devised was incorrect (Arrrgggg!!! The FRUSTRATION!!!!)

This type of learning helps to make abstract concepts more accessible for students as they begin learning something that forces them to think in a completely new and different manner.

Mr. Zufelt has already talked about bringing future students back for the activity and we look forward to working with him and his students on this and other computer science adventures at the Peabody!

NOTE: Despite still having a card catalog, the Peabody library is completely cataloged in the system used by the Oliver Wendell Holmes Library. Our librarian Mary Beth Clack is currently updating records to make monographic series more accessible. 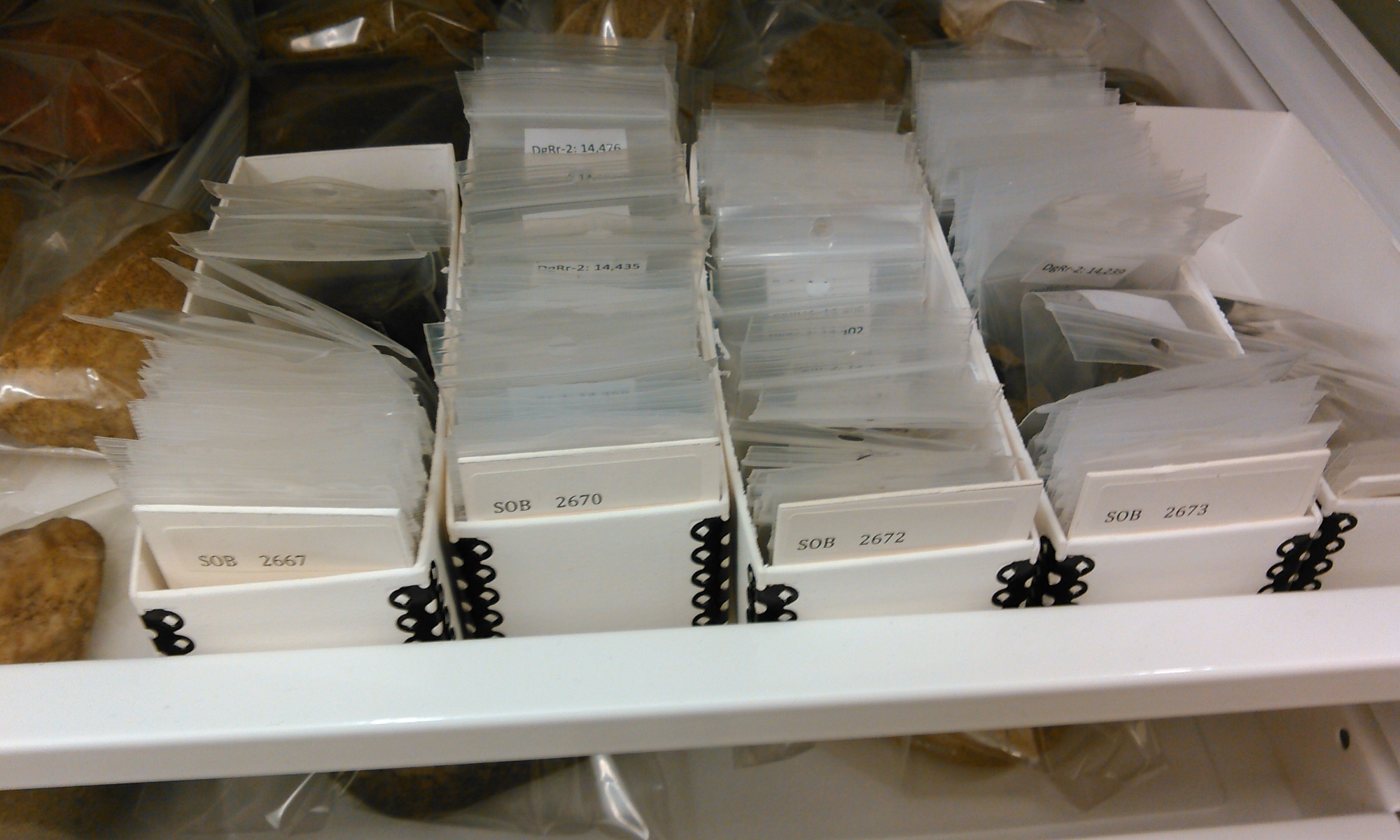 Most of the Peabody staff recently traveled to Vancouver, British Columbia to take part in the 82nd annual meeting of the Society for American Archaeology (SAA).  While at the conference, we each had our own role.  In addition to helping to staff the Peabody table in the exhibitor hall, collections assistant Samantha Hixson and I had the privilege of a collections tour at the Museum of Anthropology (MOA) and the Laboratory of Archaeology (LOA) at the University of British Columbia.

The MOA is a unique institution that houses ethnographic objects from around the world, with an emphasis on material from the Pacific Northwest. The vast majority of these pieces are on display in open storage. That means the galleries are essentially storage spaces with thousands of objects presented to the visitor with little interpretative text. 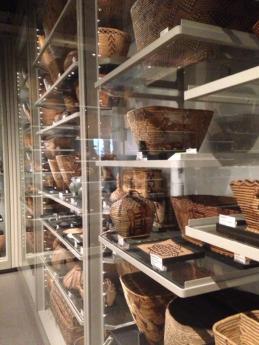 Basketry display at the MOA

Totem poles at the MOA

Display of a fish mask at the MOA

Collections storage at the MOA is impressive and elaborate. Each object has its own individually crafted mount and locations are tracked with barcodes. The Laboratory of Archaeology on the other hand has very little to no exhibition space. They carefully photograph every object for inclusion in their online catalog and individually bag and label each artifact. Their storage is no less impressive as artifacts are arrayed on compacting storage shelves with room for growth. This is the type of collections storage that I aspire to – but we have a long way to go!

Example of individual object storage at the MOA 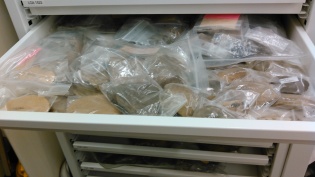 Example of individual object storage at the LOA

Collections storage at the MOA

Touring the storage spaces at these institutions was incredibly helpful as Samantha and I brainstorm to reimagine collections storage at the Peabody.  We are very grateful for the time spent and information shared with us – well worth the trip!

This blog represents the sixth entry in a blog series – Peabody 25 – that will delve into the history of the Peabody Museum through objects in our collection. A new post will be out with each newsletter, so keep your eyes peeled for the Peabody 25 tag!

At the Robert S. Peabody Museum, it seems as though there is almost no limit to the range of phenomena one can explore. When the topic Chaco Canyon was suggested, I thought looking at trade routes would be interesting. It quickly became clear that what I was about to enter was the world of a great culture which I thought had mysteriously “disappeared” about 800 years ago. What I quickly learned was that these people, the “Ancestral Puebloans,” had not disappeared. Research has shown that the Puebloans had adapted to climate change in the area by dispersing. “Today, twenty Puebloan groups in New Mexico, as well as the Hopi in Arizona, claim Chaco as their ancestral homeland and are tied to this place through oral traditions and clan lineages. A number of Navajo clans are also affiliated with Chacoan sites through their traditional stories.” (National Park Service: https://www.nps.gov/chcu/faqs.htm)

Chaco Canyon, located on a section of the Colorado Plateau in northwest New Mexico, was home to the Chacoan culture which flourished from AD 1000 to 1150. A UNESCO World Heritage Site, the people who lived there were very sophisticated. They used astronomical alignments, geometry, and impressive building techniques, allowing for multi-storied masonry houses.  They had a complex road system stretching hundreds of miles, linking Chaco to other communities. One of their buildings, four or five stories high, Pueblo Bonito, contained about 650 rooms.

The Chacoans traded with people in the Mongollon and Hohokam regions to the south and with people from Mexico and Central America.  Long-distance travel by Ancestral Puebloan people was common and among the goods they acquired were turquoise, seashells, copper and chocolate, none of which were found locally. They also traded for scarlet macaws, a bird with a natural habitat 1000 miles to the south.

Macaw feather from the Peabody collection

The Robert S. Peabody Museum has several “modern” macaw tail feathers in its collection, one of which is shown below. Preserved feathers  from 1000 years ago would be quite rare.

Scarlet macaws measure about thirty-two inches long, of which more than half is a pointed tail. They can live up to seventy-five years and eat mostly fruits, nuts and seeds. We know macaws, essentially large parrots, as intelligent birds that are quick to echo our deepest secrets using speech, a magical quality, especially because macaws have no vocal cords. That parrots are rated among the top five in the animal world for intelligence and cognition should come as no surprise. It is likely that the people of Chaco Canyon would have been awed by such an animal.

Scarlet macaws are native to the gulf coast of Mexico, Central America, and South America. The question to ask is for what purpose macaws were brought back to Pueblo Bonito?

Thirty four macaws were recovered from Pueblo Bonito and other sites in Chaco Canyon. Room 33 (see illustration above) was used as a burial crypt for 200-250 years. Macaws were found in rooms 38, 71, and 78. Archaeologist Adam Watson and his colleagues postulated that scarlet macaws were a powerful cosmological symbol and that their presence from the early tenth century reinforced and stimulated a rising social inequality. Those who possessed the birds had access to key cosmological beings and forces as well as links with far distant cultural groups. There is little doubt that the ability of the birds to speak played into this perception.

What is currently exciting is how recent radiocarbon dating of scarlet macaw skeletons from Chaco Canyon has given further insight into the question of their presence. What has been shown is that, based on acquisition and control of valued items such as chocolate and macaws, an elite class at the top of a social and political hierarchy dominated Chacoan life. (Watson et al. 2015)

What the elites achieved and their importance is amply demonstrated in their “great houses” and the acquisition of “exotic” goods from distant regions (ibid.) Included in these exotic goods were macaws. Feathers from macaws were found on prayer sticks, costumes, and masks. According to Watson and his colleagues,“…the flight of or just the appearance of certain birds or the use of their feathers is believed to motivate the fall of rain or snow, as well as the seasons, the sunshine, and the heat.”

Originally, it was believed that trade in items such as macaws at Chaco dated from around AD 1040. With radiocarbon dating done in 2010 on skeletal remains of the macaws from Pueblo Bonito, the dates of the florescence have been moved back to AD 775-875.

Whether or not the macaws were brought back to Pueblo Bonito in single journeys or in successive stages has been debated extensively. Some have raised the possibility that macaws were also bred locally in Chaco Canyon itself, although the arid region is not a natural habitat for such birds. The discovery of breeding pens, perches, bones, and eggshell fragments has led to speculation about on site breeding, but evidence suggests such macaws did not reach maturity.

“There are no indications that the people of Pueblo Bonito bred scarlet macaws. Only one of the sample birds was of breeding age and none were exceptionally young. There is also no mention of eggshells in any of the excavation notes, although one room where many of the bird remains were found was probably an aviary.” (“Scarlet macaws point to early complexity at Chaco Canyon.” A’ndrea Elyse Messer, 2015: http://news.psu.edu/story/361255/2015/06/22/research/scarlet-macaws-point-early-complexity-chaco-canyon).

One of many phenomena to explore at the Peabody, the scarlet macaw feathers represent a tangible example of extensive trade routes present in the New World prior to European contact.