In addition to working on the Inventory Rehousing Project, I survey the artifacts and ethnographic materials held in our flat file storage units. While all artifacts at the Peabody Institute require special attention, the objects stored in our flat file storage need extra TLC, such as pest protection, monitored temperature, and custom storage mounts.

Let’s take a journey through the process! Each drawer in our flat file storage is first emptied for an inventory and inspection of objects. Once emptied, the drawer is vacuumed and relined with clean Volara® foam. Volara® is a closed cell polyethylene foam that has applications in medicine and museums. Objects that are particularly susceptible to movement or damage in storage are measured for custom mounts. Custom cavity mounts provide a rare opportunity to do work outside, to enjoy the weather while carving foam with a hot knife. Next, I assess each item’s condition and photograph it for our database records. Once complete, the artifacts are returned to their newly created foam padding and/or mounts for safe resting. My most recent work includes this small cavity mount for a Thule ivory figurine of a polar bear. 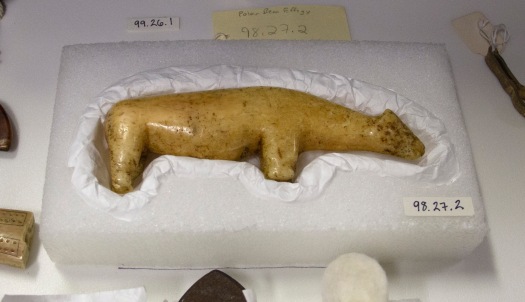 It is important to revisit these objects, not only to make sure all are accounted for, but to bring them up to today’s standards in terms of care and condition. After all, one of the most important goals of collections management is to preserve these objects to the best of our ability for future generations. 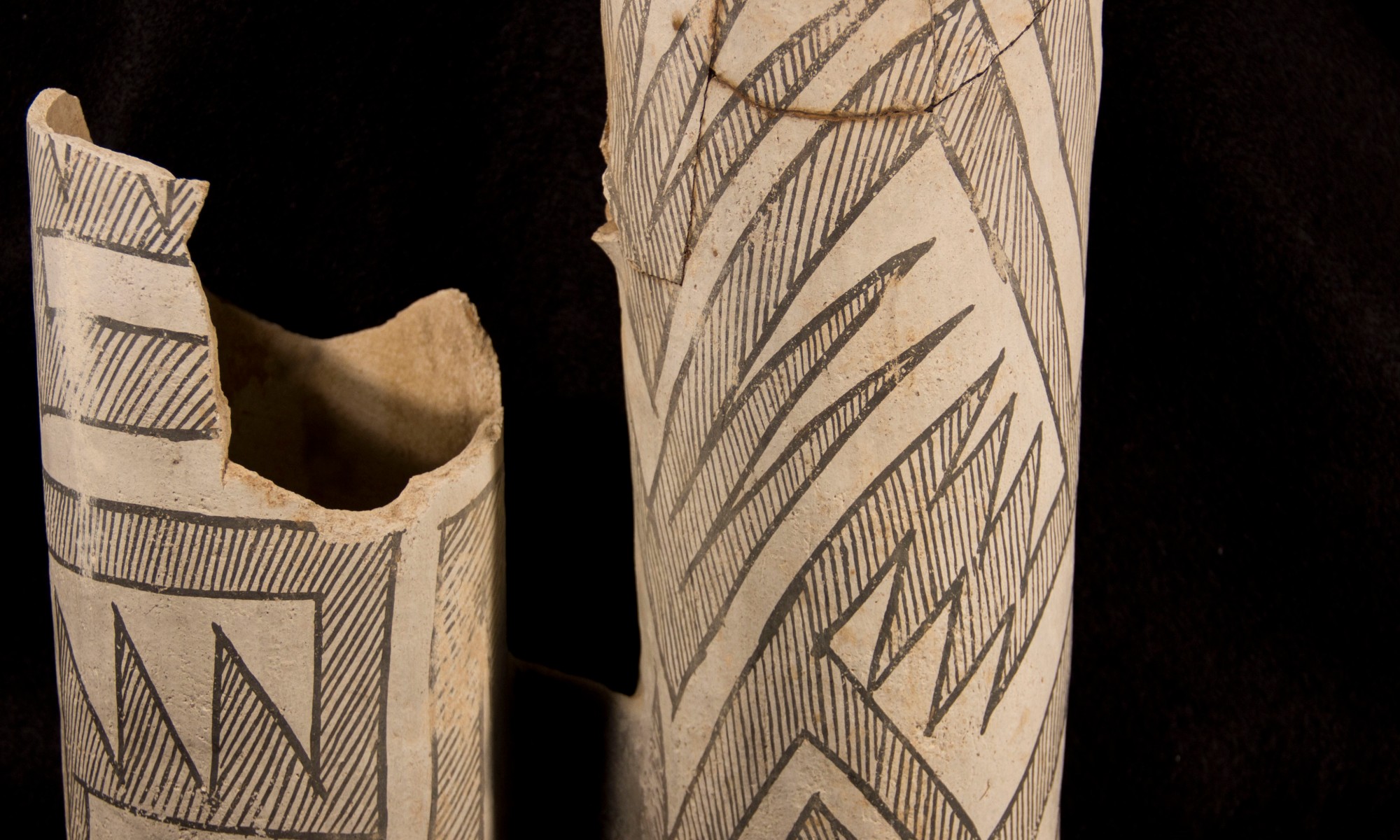 Chaco Canyon is a large archaeological site located in northwestern New Mexico. It is believed that people have inhabited the region for over 10,000 years, with large scale occupancy occurring between AD 700 and 1300. This period is known as the Pueblo period. Architecture at Chaco Canyon ranged from domestic dwellings to large, multi-story complexes. These multi-story buildings are known as Great Houses, the largest of which is Pueblo Bonito. In addition to these structures, Chaco Canyon also contains large subterranean rooms called Kivas. Kivas were typically used for ceremonial purposes, and the largest kivas could hold hundreds of people. Eventually Chaco Canyon was abandoned by its inhabitants for reasons that remain unknown. It is believed that drought was a significant factor in its abandonment.

In order to make a mount for this vessel, I needed to find a block of archival ethafoam large enough to hold the vessel. Once this was located, I carefully traced the shape of the jar into the foam. I then used a hot knife to essentially melt and cut the foam out, forming the cavity in which the vessel would rest. This part was awesome, and I got to work outside so that the smoke and fumes of melting foam didn’t set off the fire alarms. Once the cavity was made, I lined it with Tyvek paper, which is an archival material that will not damage artifacts while providing a smooth surface on which to rest. Once the Tyvek was in place, the vessel could rest inside its new home. To see a video of cavity mount making check out this link . It’s not a video of me making this mount, but the process I used was exactly the same. Now this one of a kind vessel is happily resting in a mount instead of just in a cardboard box.

The double cylinder vessel is housed in one of the drawers from our Adopt A Drawer program. If you are interested in adopting a drawer at the Peabody feel free to contact us! 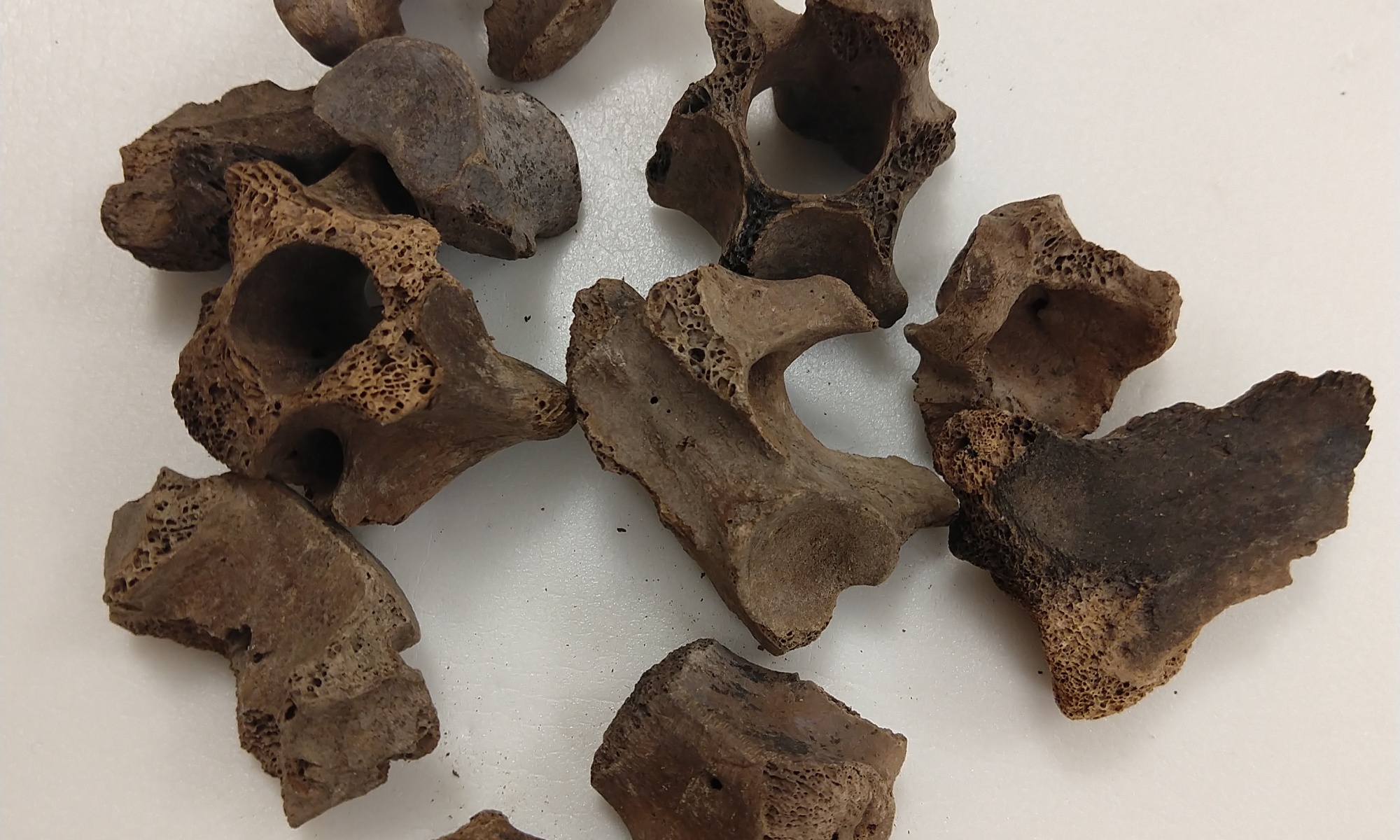 Artifact collections are not meant to stagnate – museum collections are meant to be researched, examined, and shared.  In a perfect world, all loans are returned promptly and paper-work is meticulous. But, let’s be real, in an institution with 100+ years of history, this is not often the case. Fortunately, some past researchers remember you when it is time to relocate collections.

Circa 1972, Scotty MacNeish sent faunal material from the Ayacucho Valley of Peru to Dr. Kent Flannery of the University of Michigan for analysis. Dr. Flannery is a prominent zooarchaeologist who specializes in investigating the origins of agriculture in Mesoamerica and the Near East.  Many know Flannery from his 1976 book The Early Mesoamerican Village and his 1982 article The Golden Marshalltown: A Parable for the Archeology of the 1980s. Dr. Flannery completed the Ayacucho faunal analysis and sent data and a written chapter (for Volume I of the Prehistory of the Ayacucho Basin) back to MacNeish. But the artifacts were not returned until July, 2018.

Dr. Flannery, and the Museum of Anthropological Archaeology at the University of Michigan, shipped us 493 bags and 11 small boxes of faunal material.  A loan from 45 years ago, of course, did not have much paperwork, though we did locate the original Peruvian export permits and customs documents. But, all bags and boxes are now inventoried and part of the Peabody collection. The material is from Jaywamachay Cave, Ruyru Rumi Cave, and Chumpas Cave in the Ayacucho Valley. 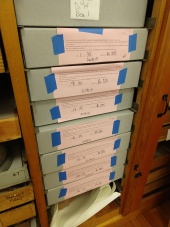 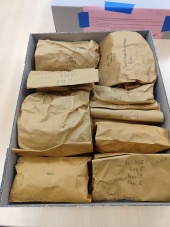 The material was largely returned in bags like these

An example of the faunal material from Ayacucho

Why does this matter? These collections can now be made available to a new generation of researchers and are reunited with other materials from MacNeish’s Ayacucho work.

If you want to learn more about the Ayacucho Valley and MacNeish’s work, check out the First Annual Report and Second Annual Report on the Ayacucho Archaeological Botanic Project. Some of the published volumes are available for free via the HathiTrust Digital Library.

On Thursday September 13 just after 5pm we received text, email, and phone alerts to evacuate all campus buildings. Phillips Academy responded quickly to evacuation orders, due to gas fires and explosions in Lawrence, Andover, and North Andover. Reports from town officials at the time stated that in Andover a total of 35 fires were reported with 18 fires burning at the same time. Significant damage was being reported from surrounding communities as well, and sirens and emergency vehicle were regular sights on Main Street. Subsequent reports indicate that older gas lines had been over pressurized, resulting in gas accumulation, fires, and explosions. Officials and first responders described the scene as a “war zone” and “Armageddon.”

Quiet study night at the Peabody had just begun when we received the evacuation order and several students were already in the building. They evacuated and joined their peers on the Great Lawn. All students were well cared for by their house counselors, faculty, and administrators and ultimately were able to get back into their dorms around 11:00pm. Classes were cancelled on Friday at Phillips Academy and in the other affected towns.

I remained at the Peabody until just after 7:00pm to ensure that there was no immediate danger to our collections. Rachel Manning arrived and kept an eye on things for another hour. Curator of Collections Marla Taylor was in touch with both of us. By this time utility workers had depressurized the gas lines in our vicinity and all electricity had been shut down to the towns.

Following in the wake of the recent conflagration and near total loss of the Brazilian national museum, we were extremely concerned about possible threats to the Peabody building and collections. The Brazilian fire illustrates just how susceptible cultural collections are to loss. In that case officials estimate that nearly 20 million objects were destroyed, including recordings of now-extinct Native languages, paintings and decorative arts, and other significant archaeological and ethnographic collections.

Happily the Peabody has never had gas service, so we were relatively safe, though gas can travel through the soil and invade basements. Gas lines do exist in the area and provide service to many of the homes and apartments on campus and in the vicinity. There is an access point to one line–a vault–just outside our building and I watched the utility worker depressurize this and shut it off. This site has continued to attract the attention of utility workers over the subsequent days. On Wednesday September 26 workers purged old gas from these lines in anticipation of line replacement.

This was a pretty scary emergency, especially considering the scale and scope. It’s absolutely heartbreaking to see the loss of homes in our Merrimack Valley community, as well as learning about the injuries to dozens of people and at least two deaths. Many homes and businesses in the area remain without heat and considerable numbers are out of work.

Before I officially became a staff member here at the Peabody, I was a volunteer and work duty student. I started volunteering at the Peabody about nine years ago, and when I came to Phillips Academy as a student I immediately signed on to do work duty. As a volunteer and work duty student, I worked to catalogue and inventory returned artifact loans, set out class activities, digitize records, and photograph artifacts. Since going to college out of state about two years ago, I have not been back at the Peabody, other than for brief visits. Reflecting on my time working here, it is fascinating, and somewhat nostalgic, to look back at what the Peabody was like when I started all those years ago and how it has changed so much since then!

When I started volunteering here, the Peabody was still officially a museum and still had standing exhibit space on the first floor. Some of those exhibit cases displayed artifacts, others dioramas or archaeology-related activities done by some Phillips Academy classes. Down in the collections, we used white cotton gloves to handle artifacts, rather than the purple nitrile gloves we use now. The reboxing project had not begun, so much of the work I did was cataloguing and inventorying in preparation for when that project might get funding. While I was doing work-duty, I sat in on some meetings about how to make the Peabody more accessible to Phillips Academy students, both in terms of the collections and the building space as a whole. Since then, the Peabody has initiated student study hours, during which the building is open to students as a study space, and renovated the first floor to make it more class-friendly!

It has been just over two years since I graduated from Phillips Academy, and I am so happy to be back working here! I study archaeology in college, and so working here, albeit temporarily, is an opportunity not only to continue learning how to preserve archaeological collections, but also to put into practice what I have learned at school, namely how to make archaeology more accessible for everyone.