Each Wednesday during the academic year, students and instructors from the PALS program visit the Peabody to learn about the history of their communities. To kick off their program I shared the rich and important Native American history of the area. Using real archaeological material from the Peabody’s collections, I asked the group to analyze animal bones, shells, rocks, and pottery fragments to tell me what Native Americans living in Andover 500 years ago were doing. After working in small groups, students used the evidence of pottery making, stone tool production, and the post molds of a wetu to surmise that native people were living in Andover for a significant period of time. This assertion by the students matches the scientific assessment by professional archaeologists and historians that Andover was a major trading village in the region.  As a reward for their amazing detective skills, the students received postcards depicting what the site looked like at the time.

To learn more about the PALS program: https://www.andover.edu/summersessionoutreach/palsprogram/pages/default.aspx 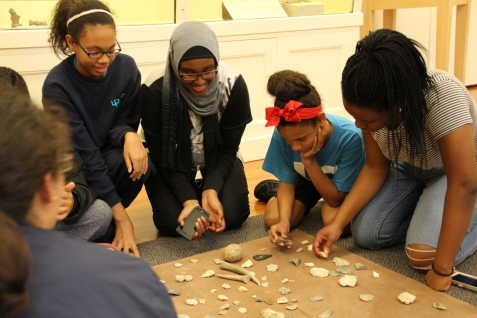