This blog represents the second entry in a blog new series – Peabody 25 – that will delve into the history of the Peabody Museum through objects in our collection. A new post will be out with each newsletter, so keep your eyes peeled for the Peabody 25 tag!

We don’t know much about the relationship between our institution’s founder Robert Singleton Peabody and his son Charles, the museum’s first director. In fact both men remain a bit of a mystery as they were intensely private and left little in the way of memoirs, notes, or archives. Robert’s rather substantial gift to the Academy, for example, was to remain anonymous until well after his death. For years we assumed that Charles, like Robert, had attended Phillips Academy. We found recently, however, that he stayed a bit closer to home and completed his high school education at the Germantown Academy—a venerable day school not far from the Peabody home in Philadelphia. In one of the few pieces of correspondence that we have between the two Peabodys, Charles exhorts his father to help him secure a position at the new Phillips Academy Department of Archaeology and asserts that he will not be the architect of his own undoing. Charles was on hand for the grand opening of the Archaeology Building in 1903, as he had been appointed the “honorary director.” One object in the Peabody’s collection provides a little window into what may have been a fraught and complicated relationship.

Object 19661 in Robert Peabody’s original collection is a small terracotta bird, perhaps a swan or goose. A handwritten note in pencil on lined paper tells us part of the story. Charles, during his tenure at the American School of Classical Studies at Athens, received the terracotta figurine from the school’s factotum Nikolaki. Charles muses in the note that Nikolaki had “hooked” it from one of the American excavations, perhaps at Argos or Eretria. Excavation reports can be found for both sites. For example, Charles Waldstein excavated at Argos from 1892 to 1895, with some focus on the Sanctuary of Hera. During the same time, Theodore Woolsey Heermance worked at the theatre of Eretria. Some quick poking around suggests that the little figurine, handmade of attic clay and covered with a white slip, is likely a votive offering. Similar offerings, representing an array of animals and birds, have been found at many Greek sites. Waldstein’s report on the Argos excavations mentions a number of terracotta figurines—some human and others animal. These offerings would have been placed in a temple for some set period and then discarded as ritual debris. Many similar examples can be found in auction catalogs and in the extensive collections exhibited at the Met. 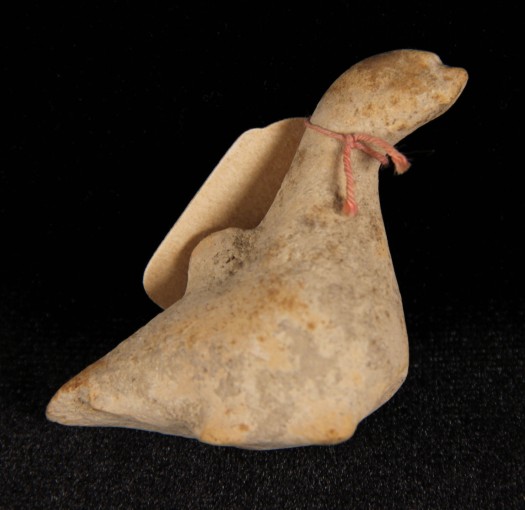 The elder and younger Peabodys did have a lot in common, beyond their interest in discretion and privacy. Both were united in a passion for archaeology. Robert’s interests were more antiquarian—during his life he amassed some 38,000 archaeological specimens, principally from North America, while Charles was devoted to the French Paleolithic and dabbled in stratigraphic excavation, when horizontal and vertical control was a new concept. In many ways the two men represented archaeology’s past and future. Robert’s interests as a student had leaned toward the classical and he was named the valedictorian of his class. His correspondence with his curator Warren Moorehead and the administrators of Phillips Academy are filled with Latin and classical references. Charles received his PhD in philology—sort of a combination of classical languages, Biblical studies, and archaeology—from Harvard in 1893. After this he spent some time in Athens at the American School where he picked up the little votive bird. Robert appended his own note—in blue pencil—to Charles’s, indicating that he had received the bird from his son in 1897. Not long after this Charles was becoming established as an instructor in European archaeology at Harvard. With the creation of the Phillips Academy Department of Archaeology in 1901 Charles spent more time in Andover, helping to make decisions about the construction of the archaeology building and ultimately teaching classes as he could. The little votive bird was shipped from Philadelphia to Andover as part of Robert’s burgeoning collections, forming the core of the Museum that we know now. With Robert’s death in 1904, Charles pursued his passion for prehistoric European archaeology, participating in and leading a number of expeditions during his career before ultimately moving to France permanently in 1924.

We can only assume that both men, well versed in classical languages and archaeology, knew exactly what that little ceramic bird was—an offering from a votary to a god.