This week saw the debut of the Peabody Museum’s History 200 lesson, “The Little Spots Allow’d Them: Slavery and Landscape in 18th-Century New England.” The lesson focuses on Ten Hills Farm, a property located in Medford, Mass., that was owned by the Royall family in the 1700s. Using the quote by Winston Churchill that “we make our buildings, and they in turn make us,” I ask students to look at how the landscape and architectural choices reflect and influence the values and roles of the individuals who created them, as well as how they continue to impact us today. 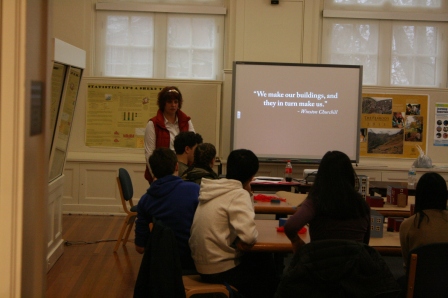 The land in Medford was purchased by Isaac Royall Sr., a son of a modest carpenter who had amassed his wealth through his sugar plantation on Antigua. Royall Sr. and, later, his son, Isaac Royall Jr., built and modified a mansion house and slave quarters and installed lavish gardens, orchards, and other features into the landscape.

The landscape and architecture of Ten Hills Farm was not solely a means to display the Royalls’ status and wealth to the other white inhabitants of Boston and surrounding land. They also served as a “conversation without words” between the masters and their slaves.

One of my favorite parts of the lesson is when I ask students to use strings to create lines of sight from the mansion house. After they have completed the task, they are able to see that a large section of the land next to the slave quarters cannot be seen from the mansion house. The students and I discuss why the Royalls would deliberately create a space that was out of their view, and then I challenge them to look at how those who were enslaved would have viewed the same parcel of land. To the slaves, this piece of land would have been one of the only places they could experience themselves and one another as human beings and retain some control over their lives. 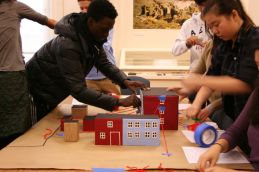 At the end of the lesson, we discuss how the Colonial construction of racial categories was cemented and enforced through building and land-use choices. It is interesting to contemplate how building choices such as the ones made at Ten Hills Farm helped move the concept of blacks being “other” or “less than” from simply being an idea, to one that was tangible, was real, and, most insidiously, seemed natural.

This lesson is particularly important for our students to understand as they become more connected with the world outside of Phillips Academy and their home communities. We are still seeing the consequences of these “conversations without words” in our world today, with some of the most notable examples being Ferguson and Baltimore. As our students move forward in society, it is important that we support their ethical development and understanding.

An interesting recent development, and one that makes this lesson timely and even more important, concerns the Royall family and their connection to Harvard University. Harvard Law School was established through the bequest of Isaac Royall Jr.’s estate in 1817. The Royall family crest still serves as the school’s seal. There is a growing movement named Royall Must Fall asking for the removal of the seal due to its connection to slavery: https://www.bostonglobe.com/metro/2015/11/10/student-group-opposes-harvard-law-seal-citing-slavery-ties/esUi7LUfqCS2oXSfUwuaNP/story.html