Did you know that you can find artifacts from the Peabody in Washington, D.C.?  Well, you can!

In 2018, the National Museum of African American History and Culture (NMAAHC) contacted the Peabody to request the loan of objects associated with Lucy Foster, a free Black woman, who lived in the Ballardvale section of Andover, for their Slavery and Freedom exhibition. Here is how the NMAAHC describes the exhibition:

The Slavery and Freedom inaugural exhibition is at the physical heart of the Smithsonian’s National Museum of African American History and Culture. The exhibition invites visitors to explore the complex and intertwined histories of slavery and freedom through the personal stories of those who experienced it. Chronicling the early 15th century through 1876, the exhibition explores the cultural, economic, and political legacies of the making of modern slavery and the foundation of American freedoms. Visitors will encounter both free and enslaved African Americans’ contributions to the making of America in body, mind, and spirit. They will glimpse a vision of freedom—an American freedom—pushed to its fullest and most transformational limits through the everyday actions of men and women. Most importantly, they will walk away with an understanding of how the story of slavery and freedom is a shared American history with deep roots linking all people together and that still impacts American society today.

The discovery of Lucy Foster’s homestead was an accident in 1945 as archaeologists Adelaide and Ripley Bullen were looking for evidence of an ancient Native American settlement. Lucy’s early nineteenth century homestead was instead one of the first African American archaeological sites excavated in the United States. To learn more about the excavation and the artifacts recovered, check out these sources:

You can also find many of Lucy’s belongings in our online collection.

A partially reconstructed mug from the Lucy Foster site

Knife from the Lucy Foster site

Padlock from the Lucy Foster site

The Lucy Foster site objects are displayed in Slavery and Freedom in “The Northern Colonies: Expanding Merchant Capital” section of the museum. These objects allow the NMAAHC to tell the story of women and their work in the north and bring to light the personal voice and story of Lucy Foster. Foster was born in Boston in 1767 and was sold into the household of Job and Hannah Foster at age four, in 1771. She worked as a domestic in their household until Job’s death in 1789, when she moved with Hannah to her new husband Philemon Chandler’s household. After Chandler’s death, they moved back to the Foster household until Hannah’s death in 1815. Lucy then established her own household on land willed to her by Hannah. Lucy died of pneumonia on November 1, 1845. Occasional mentions of Lucy in historical documents, coupled with the archaeological remains, has allowed a glimpse into her life.

The NMAAHC requested these objects because Lucy’s story is unique. She is one of two People of Color from this area with documentary and archaeological records to tell her story. Lucy was part of both free and enslaved communities in Andover, and these objects show how she continually used her sewing and cooking skills to carve a place for herself in the Andover community. These objects embody the presence of women and their work as fundamental to the northern states and are a rare example of objects from the early nineteenth century concretely connected to an enslaved person. 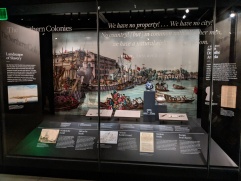 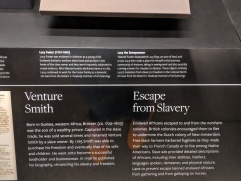 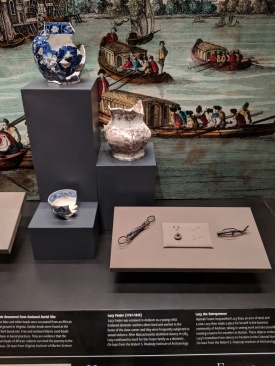 3 Replies to “Peabody at the Smithsonian”