Cloth was the books the Spanish could not burn.

During Fall Term I worked with Meg Bednarcik and Nick Zufelt – both Instructors in Mathematics, Statistics, and Computer Science – to create a class that would focus on the computer science concepts of looping and parameters.

We decided to utilize the extensive Guatemalan textile collection at the Peabody, as they are brightly colored and engaging and most have repeating, or looping, motifs. We also liked the idea of incorporating clothing made and worn exclusively by indigenous women into a subject where they are woefully underrepresented.

Eighteen huipils (wee-peels) were pulled for the class, with the images of another twelve scanned. A huipil is a traditional Maya women’s shirt. 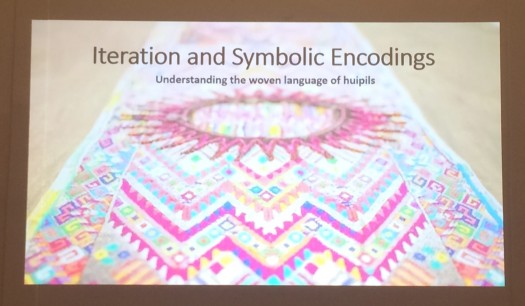 The first activity was a matching game to show students how huipils had silent information encoded into them about the wearer’s home community. Each village has its own distinctive design. The students were given twelve cards with images of other huipils in our collection and asked to match them to huipils that were laid out in the room. The following images are from three villages, highlighting how the differences between villages, as well as the variation within a particular village. 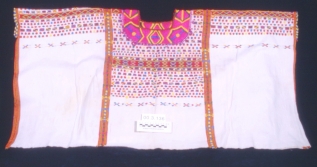 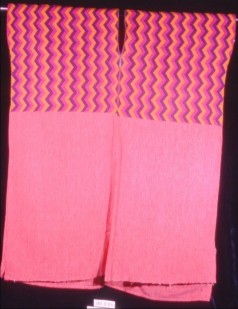 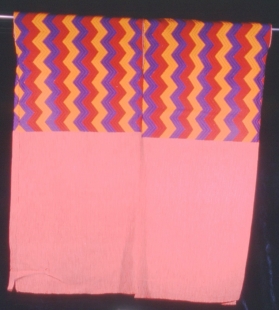 Then students worked with either Meg or Nick to find designs that had looping designs, or nested loops. Then they worked on creating parameters for the designs they had found.

The third activity was asking students to identify certain motifs that are common in Maya imagery. Some, such as a deer, were more literal then others, such as the feathered water serpent or portals.

And as you learn in the write up bellow by Meg, this class served as the starting point for a term long project the students will be working on:

My AP CS A students ventured to the Peabody Institute to learn of Guatemalan huipils and the stories these women’s clothes tell of personal identity. The students will complete follow-up assignments to program their own design defining their personal identity here at the academy and beyond utilizing programming concepts learned in class such as objects and repetitions. Though many students were shocked to be at the Peabody for a CS class, they left reflecting on the many ways these programming ideas apply to other aspects of our world. I am eager to continue to utilize these resources at our fingertips to allow students the space to ponder their place in our interconnected world beyond PA, and consider the beneficial impact their work as computer scientists can have on others outside of the classroom.

This has been one of the most interesting and fun classes for me to develop. I really enjoyed working with and learning about part of our collection that is underutilized. But most of all, I have been thoroughly engrossed by the current action Maya women are taking to ensure that their designs are protected and not appropriated. Based on the information I gleaned from my research, I included a huipil from Santiago Sacatepéquez, which is the only community so far that has been able to give legal protection to their woven intellectual property.

To learn more about huipils and their images, visit Guatemala City’s Ixchel Museum of Indigenous Textiles and Clothing website.

Below are symbols found in some of the huipils in the Peabody’s collection:

Deer – Deer held particular significance in Maya mythology and the Dance of the Deer, originating from pre-Conquest times, is still performed at festivals today.

The Double Headed Eagle – The double headed eagle in Maya mythology represents the Great God with two faces, one looking to good and the other to evil, or to heaven and earth. Double-headed birds are motifs frequently used for decorating ceremonial garments. The image to the right outlines the shape of the double headed eagle. 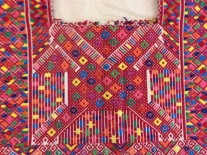 Sky bands – represents the path of the sun with the Xs formed in the “empty” space refers to the end of the solstices.

Offering plate / Portal – “portal” or “door” was the Maya name for the entrance into the “other world” (spirit world). The dot in the center represents the door through which an ancestor can travel.

The Star That Proceeds The Sun – This motif has been a part of Mesoamerican cosmology since Olmec times. It can be seen in celestial bands along with the sun, the moon, and particularly Venus. It is also featured in codices, such as the Popol Vuh.

Bird – At the beginning of the rains, and when maize is sowed, they can be seen in large quantities on the rivers and lakes.

Sun – A sun is embroidered around the neckline. If a woman in the village just became a widow, she would wear her huipil without the sun around the neck, because she would have lost her sun

Lightning – Vertical zigzag lines are associated with rain and lightning.

Lion / Jaguar – The animal has been given a mane, indicating European influence. The cougar or American lion has no mane. 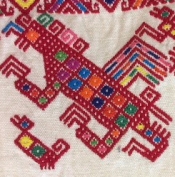