In July, I once again partnered with Dr. Bethany Jay of Salem State University to teach the graduate class for history teachers that focuses on using archaeology in the classroom to teach about marginalized individuals, who are often overlooked.

Since it is now our fifth year running this class, it is always exciting when we get to experience something new ourselves. This year we added a tour of the Gedney House in Salem to our listing of sites we were visiting. One of the students in the class, Tom, is a tour guide for the Gedney House and took us all around the historic house – we even got to go into the creepy basement! 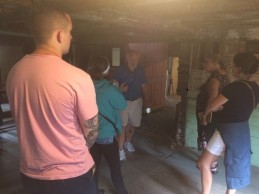 Tom giving our class a tour of the Gedney House

Tom giving our class a tour of the Gedney House

The Gedney House is owned by Historic New England and was built in 1665, making it one of the oldest houses in Salem. Given the fire that swept through Salem in 1914, it is amazing that this structure still stands today.

The house has gone through a lot of iterations throughout its history and they have left their marks on the building. Starting first as a single family home, for shipwright Eleazer Gedney, major renovations to the façade were added in the eighteenth and nineteenth centuries. Later it became a tenement in Salem’s Italian-American neighborhood.

What makes the house so interesting to history lovers (and archaeologists!) is that the house was originally set for total rehab in the 1960s and so the inside was completely gutted. That means that you can now see the original structure as well as the evidence for later renovations. It really sets the house apart from other first period houses located in New England. Dr. Abbott Lowell Cummings, a prominent architectural historian, once said that the “Gedney House in Salem, Massachusetts is the example par excellence which must be protected under a glass bell jar” due to the scholarly impact its raw architectural state offers to historic preservationists seeking to better understand the construction methods of these early houses so that they can more faithfully restore such structures.

Cummings was also the first scholar to suggest that dendrochronology (the study of tree rings for dating purposes) be used in New England to date the earliest colonial houses, using the Gedney House as one of the first structures on which to test this technique. After the former owner had stripped away much of the interior trim down to the frame, a beam that had been cut into at some point in the house’s history was exposed. The cut revealed an almost complete cross-section of the beam’s tree rings. Cummings used the rings to date the construction of the house to 1664-1665 based on a set of specific drought rings that coincided with the 1590s and 1615-1620.

If you happen to find yourself in Salem, MA during one of the days the house is open for limited tours (first Saturdays in April-October), I can’t recommend it enough. As you walk through the building, you can see the signs of each of the unique periods, as well as how they overlap with each other. So many people have called that house their home and their stories are literally carved into the frame of the house.

What a life the Gedney House has lived!!